A Brief History of
Adult Parties in Kent 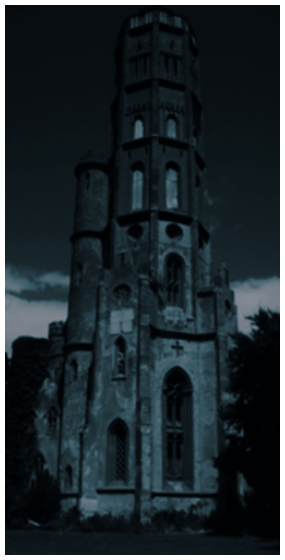 We had been organising swinger parties for years in many locations but not in Kent. Then, one day in February 1999, the phone rang and the voice at the other end introduced himself as the owner of a castle near to Tonbridge. He informed us that he hired his home out to groups like ourselves for the purpose of holding all types of adult parties, from fetish ones to swinger events.

He was keen for us to visit him and look over his premises at Hadlow castle. This we agreed to do one day in the following week.

Hadlow castle is actually a "Gothic Folly", built in the late 18th century. We caught several glimpses of it's one hundred and seventy foot tower from the road whilst we were still a few miles off. When we arrived, it was the tower itself that we had to go to to meet Michael, the owner. He had already explained that it was the tower that he owned and lived in and that the other buildings were not his. He had warned us that the residents of these other buildings were most unhappy about him holding sex parties in the tower and to be careful not to go knocking at the wrong door.

Following a tour of the tower and negotiations for it's hire for regular swinger parties, we returned to contact our members with a date and information about the first party.

This was held on 6th March that year and was well attended by some twenty six couples and five singles. Regular Saturday evening swinger parties followed throughout the remainder of the year.

Some time in the early autumn, we made the decision to run some "Greedy Girls Parties" based on a growing demand from some couples and single females who told us how much they enjoyed having fun with an excess of males. These parties were run mainly on Thursday and Friday evenings and they eventually became even more popular than the swinger parties.

News of the World Raid

Whilst we continued to hold our strictly, members only parties in the tower, Michael occasionally hired it out to other, less organised groups. One of these turned out to have absolutely no security checks on who attended their parties and in early April 2000, they inadvertently allowed News of the World reporters to infiltrate the party. 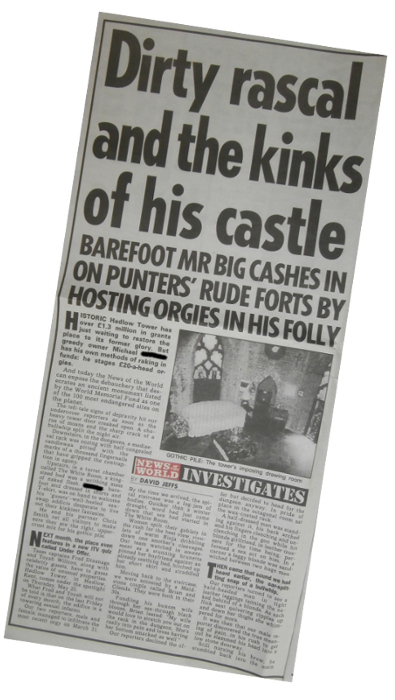 The following Sunday a disgracefully worded article with pictures of the tower and of Michael filled the newspaper's centre pages. It was headed; "Dirty Rascal and the Kinks of his Castle" and claimed to; "expose the debauchery that desecrates an ancient monument".

As is the usual case with such attacks on the freedom of those adopting an alternative lifestyle, the publicity had the opposite effect of what was intended. We were inundated with membership applications and quickly grew to be the most popular and active adult parties and dating club in Kent.

The parties at the tower continued right up until January 2011, when a compulsory purchase order gave it to Tonbridge and Malling District Council who immediately sold it to the Vivat Trust for &pound1. The tower's restoration was funded by English Heritage and the Heritage Lottery Fund and the public are now able to visit an exhibition space on the ground floor.

Whilst we miss the unique atmosphere Hadlow Castle gave to our parties, long before the time of the compulsory purchase our membership system had evolved into a sophisticated, online adult dating service in which members were holding their own parties in every area of Kent. Although special venues like Hadlow Castle can add some extra spice to adult parties, it is people and not buildings that make good parties.
Hadlow was our beginning but Kentparties have come a long way since the days it was our only party venue in Kent. Nowadays our members are able to enjoy adult fun all over the county whenever they want to.